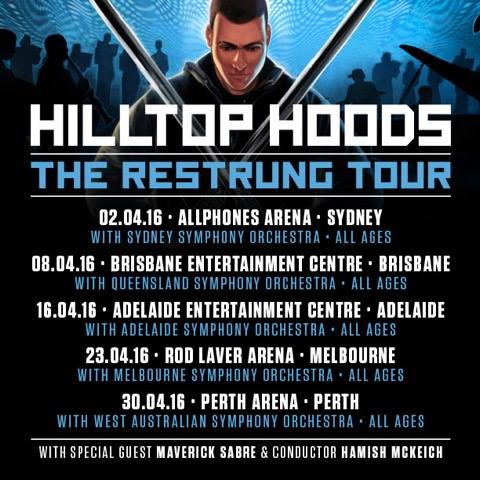 To celebrate the release of their new album,‘Drinking From The Sun, Walking Under Stars Restrung’, HILLTOP HOODS will be undertaking their biggest and most adventurous domestic tour to date. The Restrung Tour, which will see the onlyHILLTOP HOODS headline performances in 2016, promises to be an extraordinary event as it brings to life the music from  the new album with Australia’s best orchestras and choirs. Once again, HILLTOP HOODS continue to rewrite the Hip Hop rule-book.

“We’re pretty excited to be hitting the road backed by an orchestra and a choir. The songs are going to take on a whole new life with fifty plus musicians joining us on stage.” – SUFFA

Special guests on the national tour is A.B. Original a new project by Briggs & Trials along with London-born, rural Ireland- raised singing star Maverick Sabre, who has already collaborated with HILLTOP HOODSon hits ‘Won’t Let You Down’ & ‘Live and Let Go’. With a short career already producing UK gold-selling 2012 debut album – ‘Lonely Are The Brave’ – Maverick’s keenly-observed lyrics and superb soul vocals will be the first time Australian audiences experience the class that is Maverick Sabre.

Also performing with HILLTOP HOODS and the State Orchestras and Choirs will be New Zealand born conductor Hamish McKeich. Hamish has forged an impressive international conducting career working regularly in Europe, Australia and with New Zealand’s major orchestras – he has also performed in places as far flung as China to Armenia, Lebanon to Italy.