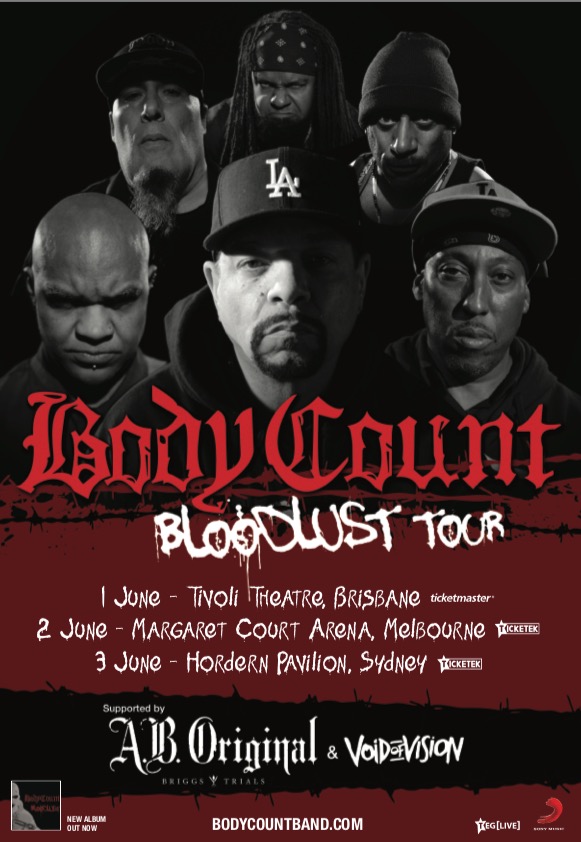 Strap yourself in as ICE-T’S BODY COUNT announce some very special guests for their first Australian tour in 22 years. They’ll be performing in Brisbane, Sydney and Melbourne with A.B. ORIGINAL and VOID OF VISION.
A.B. ORIGINAL write songs in the spirit of N.W.A and West Side Connection, while lyrically bringing attention to issues closer to home. Respectively coming from the Yorta Yorta and Ngarrindjeri tribes, Briggs and Trials are socially conscious outspoken Indigenous artists.
A.B. ORIGINAL’S debut album Reclaim Australia reached #10 on the ARIA charts and #1 on the iTunes charts in the first week in November 2016. It won the 2016 Australian Music Prize, the first time in the AMP’s 12 year history that an Indigenous artist has won the coveted annual prize. The duo have performed to sold out audiences at the Rolling Stones Live Lodge, a BIGSOUND showcase, supported Hilltop Hoods on their national stadium tour and recently the St Jerome’s Laneway Festival.
Today they unveiled the new single and companion video for Report To The Mist which is a statement about police brutality towards A.B Original’s community. Division, racial profiling and discrimination are ever present within the relationship between Aboriginal people and the police. You can watch Report To The Mist HERE
VOID OF VISION broke into Melbourne’s heavy music scene early 2013 and touring in 2014 saw them tour 3 national tours with Hand Of Mercy, Hellions, Elegist, Villes (SNG) and The Sweet Apes. In 2016 they released their debut, Children Of Chrome which took them on their first overseas jaunt (supporting Chelsea Grin throughout Europe). Renowned for their erratic live show, VOID OF VISION have won over the hearts of heavy music fans all over and have continued that explosive momentum into 2017.