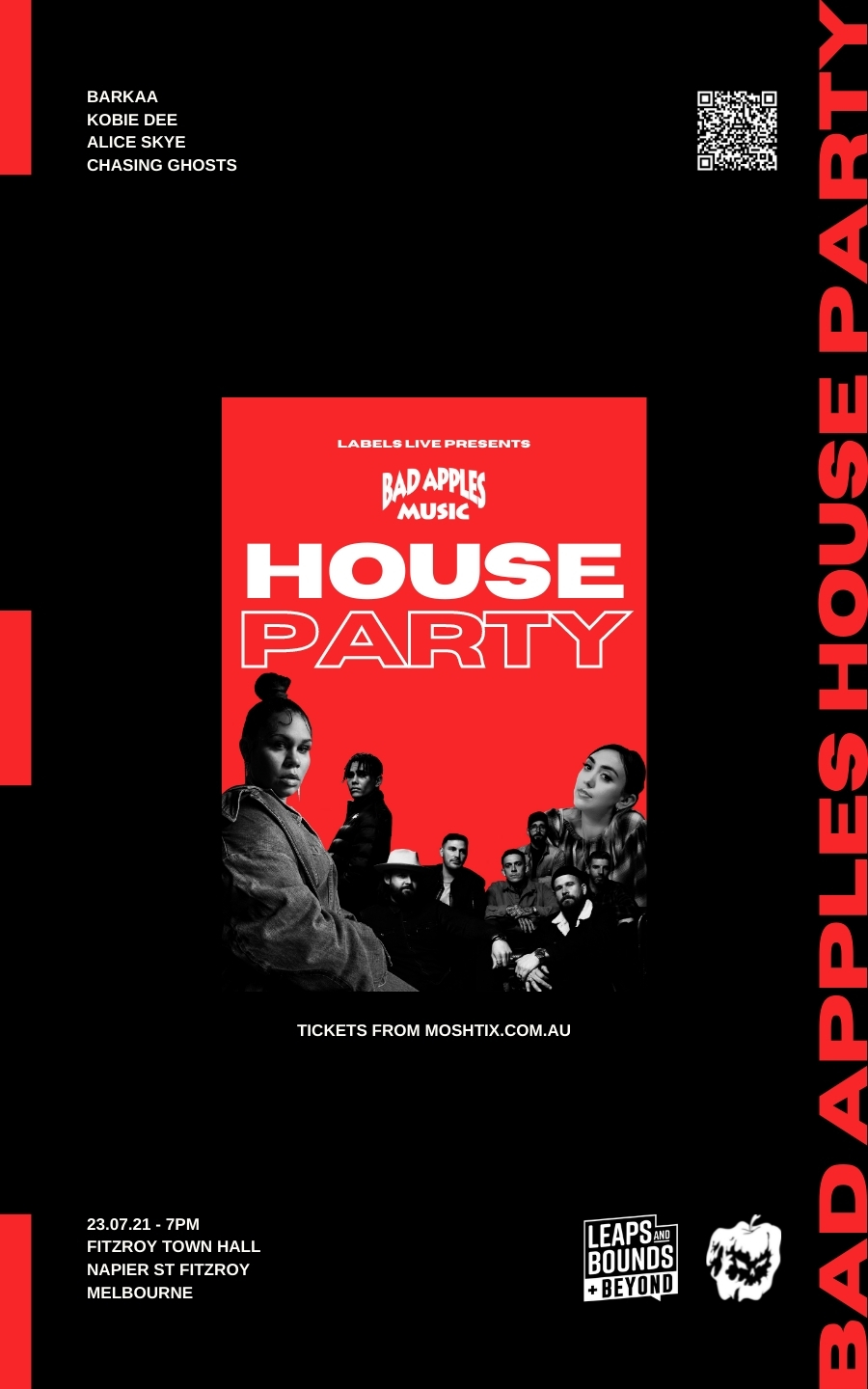 Bad Apples Music was established to genuinely nurture and support Blak Excellence, this will be your chance to celebrate with some of the label’s roster at this one off event.

BARKAA
BARKAA is a Malyangapa, Barkindji woman from Western New South Wales, now living in South West Sydney on Gandangara land. Music to BARKAA has been part of her journey to express herself, the truth and issues impacting First Nations people.

2021 was a massive year for BARKAA as she launched herself onto the music scene. She was awarded the 2020 PUMA Rookie Of The Year Award for Acclaim Magazine and has been listed as one of the Top 5 female rappers in Australia by ABC’s Triple J, one of 15 Sydney rappers ruling 2020 by Redbull and featured in GQ Magazine, proving that BARKAA is on a fast and steady incline as a critical contributor to Australia’s musical landscape.

Kobie Dee
Kobie Dee is a 23-year-old Gomeroi artist from Maroubra in South Sydney, Bidjigal Land. With an innate gift for storytelling and connecting with young people, Kobie Dee is one of the exciting new voices in Australian hip hop. As an artist, Kobie is deeply engaged in his community through performance and community work, and his passion for his culture and people is inspiring new generations.

“Kobie Dee’s recent single ‘Role Models’ continues to see the Gamilaroi artist rap with transparency and unashamed honesty. The young artist’s ability to connect on a personal level through his music has been impressing folk since 2018, but as he weaves lyrical magic around stories from not only his own experience, but that of his community’s, Kobie Dee is truly shining out here in 2021.” – Triple J

Alice Skye
Alice Skye is a Wergaia/Wemba Wemba person living and writing music in Naarm (Melbourne, Australia). Since her first album, the critically acclaimed ‘Friends with Feelings’ was released on the iconic Alice Springs CAAMA Music Record label, she has signed with Bad Apples, the Indigenous-driven label headed by Briggs that celebrates and prioritises’ blak excellence. Alice’s highly anticipated sophomore album ‘I Feel Better but I Don’t Feel Good’ will be released on July 23 following a twelve month Covid delay.

The new full length is forged at the intersection of her unmatched, intimate song writing with a rich sound palette, shaped by Jen Cloher and Alice’s own childhood friends and close bandmates, Sam and Kane King. Translating raw, familiar introspection into a cohesive collection of dreamy indie cuts, rock ballads and softer moments, Alice’s emotional transparency targets the push-pull of the relationships we keep with ourselves and others, instilling a healing ode to life and getting by.

The latest single Party Tricks oozes with darker rock production and a taste of grunge and has found its way onto the playlists of many Australian and several US radio playlists along with a host of streaming lists. Party Tricks followed three searing singles Grand Ideas, the title track, I feel Better But I Don’t Feel Good and Stay In Bed. Her work continues to look inwards and explores finding staunchness in softness.

Chasing Ghosts
‘Homelands’ is the new EP from Aboriginal led punk rock band Chasing Ghosts. It was produced founder frontman and chief song-writer Jimmy Kyle and Lincoln Le Fevre (Luca Brasi, Wil Wagner, Lucy Wilson) “I was scared to write these songs, because a lot of the topics are challenging,” says Jimmy Kyle, a proud Goori man, of the Thungutti mob from the mid-north coast of NSW

“But that’s how I knew I was onto something. It made me feel nervous.” “I know people are going to come after me with some of these songs,” he says. “But I know in my heart that telling these stories is right and telling them in the way I do is the right thing to do. I know my audience is predominantly non-Indigenous, so I have to engage them in a way that engages their heart. Because that way they’re not going to be judged, but they can put themselves in an empathetic position to go on the journey.