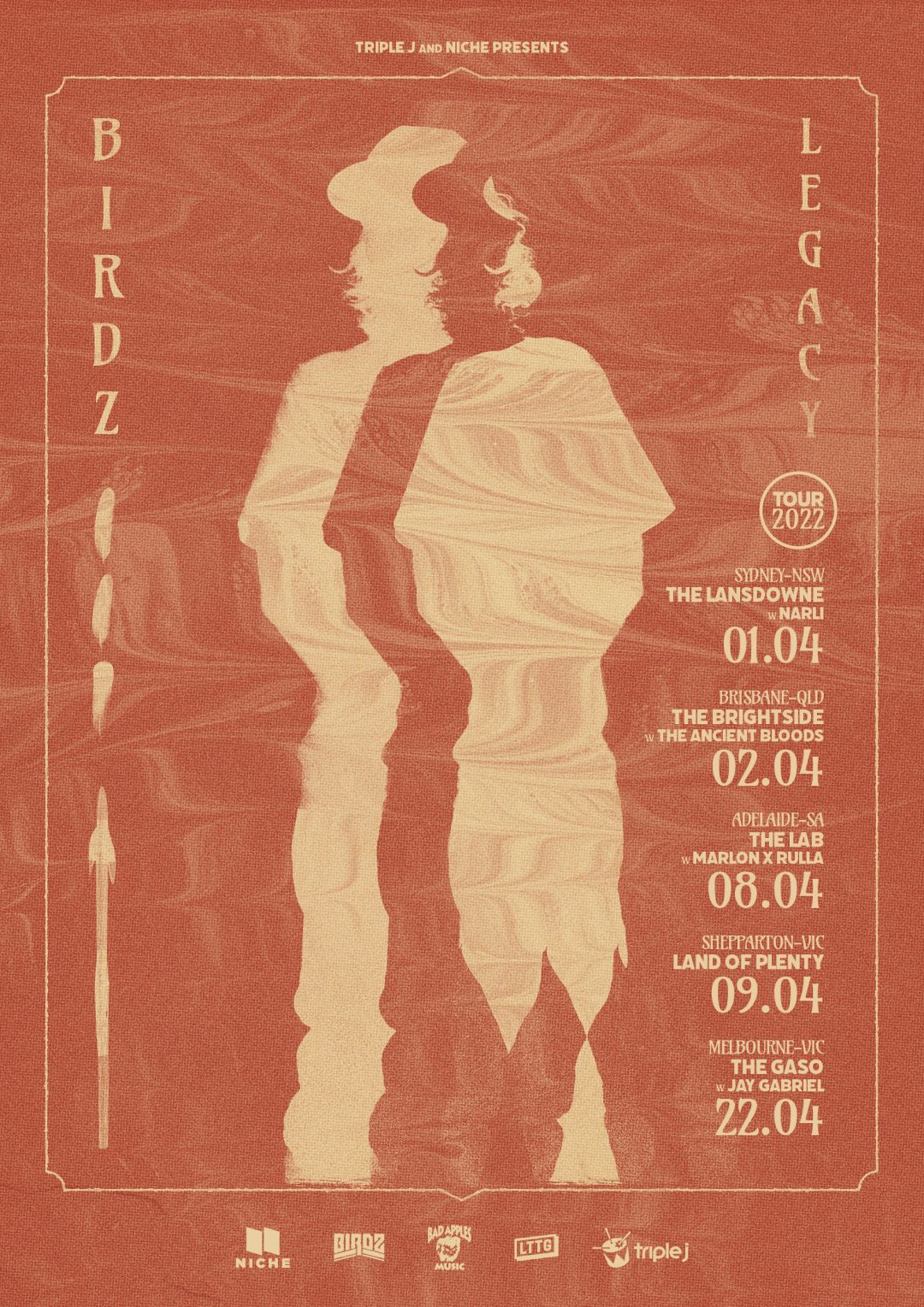 Bringing his versatile rhymes first to Sydney’s The Lansdowne Hotel on April 1, Birdz will then head north to Brisbane’s The Brightside on April 2. The following week the esteemed MC will hit The Lab in Adelaide on April 8 before making an appearance at Shepparton’s Land of Plenty Festival on April 9. Later that month, Birdz will bring his string of shows to a close at hometown Melbourne’s The Gasometer on April 22. Presented by triple j, Birdz’s national tour is a showcase of the new music he’s been giving fans a taste of over the past few months, celebrating his unique brand of honest, powerful hip-hop across both the new record and the favourites fans know and love.

LEGACY sees Birdz tap into his long-running vision that hip-hop is a powerful vehicle for driving messages of hope, empowerment and self-determination. Across ten diverse and sharply executed tracks, Birdz reevaluates his core values by exploring the kind of legacy he’d like to leave behind for his family, specifically his young son, through a refreshed and unified lens of self-worth, potential and purpose. Further paying homage to his heritage as a proud Butchulla man, the LEGACY album artwork, unveiled today, incorporates colours inspired by his country of K’gari (Fraser island) and a split silhouette, representing three generations of great importance to the record’s fruition; Birdz, his father, and his son.

Birdz details on the album artwork: “I told Jack (Listen To The Graphics) about the concept and he came back with the initial design with my silhouette representing the three generations. The textures he used really reminded me of ochre and sand. I thought it would be really dope to bring that out even more and use a colour scheme that’s inspired by our country, K’gari (Fraser island). I called my cousin Fred (Leone), who’s a Butchulla song man and also features on the album, and he sent me photos of the coloured sands from K’gari that are used for artwork on country. I then sent those photos to Jack and he redesigned the colours on the cover. For me, including Fred in the process and having that knowledge of country represented on the cover just took the meaning of it all to a whole new level and I feel like it really connects the album to my family and where we’re from.”

Birdz released his 2017 debut album Train Of Thought to widespread acclaim, winning the Australian Independent Record Label Associations’ title of Best Independent Hip Hop Album. Following his impressive debut project, he delivered his 2019 Place Of Dreams EP, earning a nomination for the Corner Hotel Artist Of The Year Award, a national tour supporting Seth Sentry and high rotation on triple j. In the growing anticipation of his upcoming release, Birdz has appeared on ABC’s The Set with Missy Higgins, as well as featuring on triple j and ABC i-view’s RAP IT UP documentary series. Showing an unwavering commitment and passion for his craft, Birdz’s upcoming tour will see him dominate stages across the country, a feat he has mastered from performing with the likes of J.I.D., Sampa The Great, Loyle Carner, Seth Sentry, Briggs and the Thundamentals, as well as along the festival circuit at Groovin The Moo, Woodford, St Kilda Festival and The Hills Are Alive.

Boasting a reputation for enrapturing every stage he graces, don’t miss your chance to join one of Australia’s most diverse hip-hop talents, Birdz, live on his LEGACY tour this April.