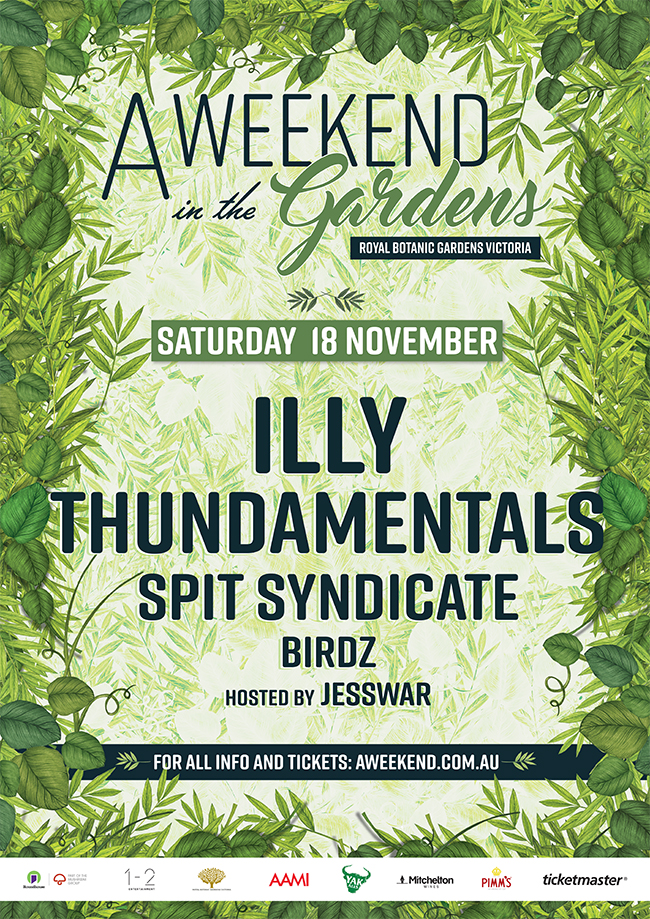 BIRDZ @ A Weekend In The Gardens

After the overwhelming success of its inaugural event in March, A WEEKEND In The Gardens makes a triumphant return this November with three incredible nights of music headlined by Paul Kelly, Missy Higgins and Illy.

Developed by the team behind the highly successful a day on the green winery series, A WEEKEND In The Gardens was instantly embraced by music lovers and brought nearly 12,000 Melburnians into the beautiful surrounds of the Gardens.

At November’s event ARIA Award-winning rapper and hip-hop artist ILLY headlines the Saturday night show. With a #1 ARIA album Two Degrees and smash hits Papercuts (featuring Vera Blue) and Catch 22 (featuring Rudimental’s Anne-Marie), ILLY has staked his claim as of the most exciting and innovative new talents in Australian music.

The lineup that will also feature THUNDAMENTALS, SPIT SYNDICATE and BIRDZ and is hosted by JESSWAR. All tickets are general admission.

Melbourne’s Royal Botanic Gardens have never sounded so good or tasted so delicious! Don’t miss out on your ticket to the event fast becoming a must-do on the city’s concert calendar in undoubtedly the city’s most beautiful setting for a live concert!