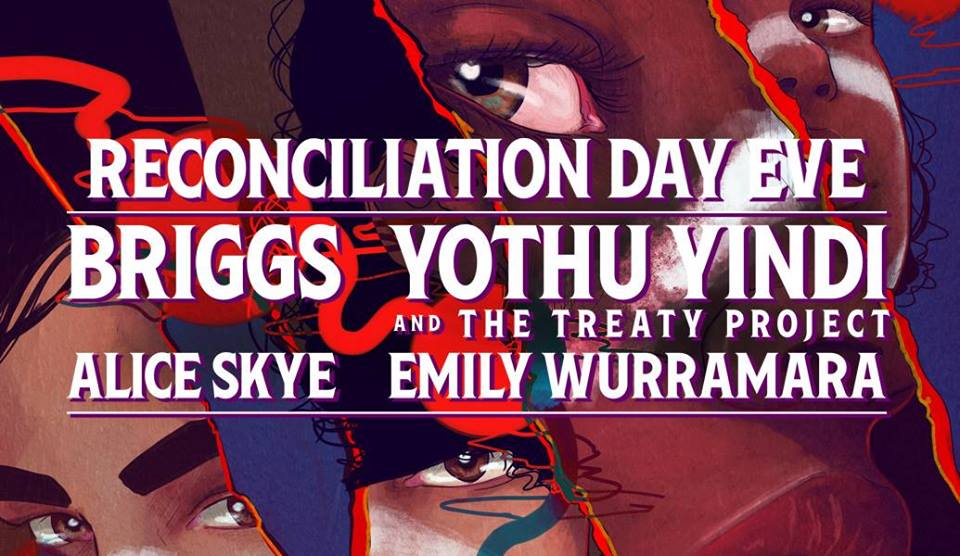 In the capital, on the eve of the Reconciliation Day public holiday, some of the strongest voices in the country are coming together to honour the anniversary of the 1967 Referendum.

This year the event coincides with National Sorry Day and, continuing the tradition that started last year, powerhouse rapper Briggs will return to the stage along with Australian icons Yothu Yindi & The Treaty Project for a celebration of Black Excellence. They will be joined on the evening by Alice Skye and Emily Wurramara for what promises to be a night of power and beauty.

ALICE SKYE is a singer-songwriter, Wergaia woman, and universal little sister. She released her debut album Friends With Feelings in 2018 and toured nationally.

Her songs sparkle with a sensitivity and maturity well beyond her years, accompanied by the gentle and hauntingly sparse melodies of a piano score. Alice was awarded the inaugural First Peoples Emerging Artist Award at the One of One International Women’s Day Breakfast in Melbourne this March, and is also this weeks triple j Unearthed feature artist.

BRIGGS is a powerhouse rapper and Bad Apples Music Founder/CEO who has created records that have made him a pioneer of the new wave of Australian hip-hop. His outspoken critiques of Australian culture have given a strong voice to Aboriginal and Torres Strait Islanders nationally.

As a multidisciplinary artist, BRIGGS is on your televisions starring in Cleverman, Charlie Pickering’s The Weekly and Get Krackin, writing scripts for Matt Groening’s new animation series Disenchantment or reverberating through your turntables with his critically acclaimed albums both as a solo artist and as one half of the award winning duo, A.B. Original.

YOTHU YINDI & THE TREATY PROJECT was initially launched in 2017, to celebrate the release of the 25th anniversary remix pack of Yothu Yindi’s “Treaty” and raise awareness for the need for treaty with Australia’s First Nations people.

EMILY WURRAMARA is an artist hailing from Groote Eylandt via Brisbane, singer-songwriter Emily Wurramara released her debut EP Black Smoke in 2016. Containing stories from her heart and childhood sung in both English and her traditional language Anindilyakwa, the EP stunned listeners across the country and saw Emily tour nationally and internationally.

Please be aware, due to the nature of this show, some patrons may stand during the performance.