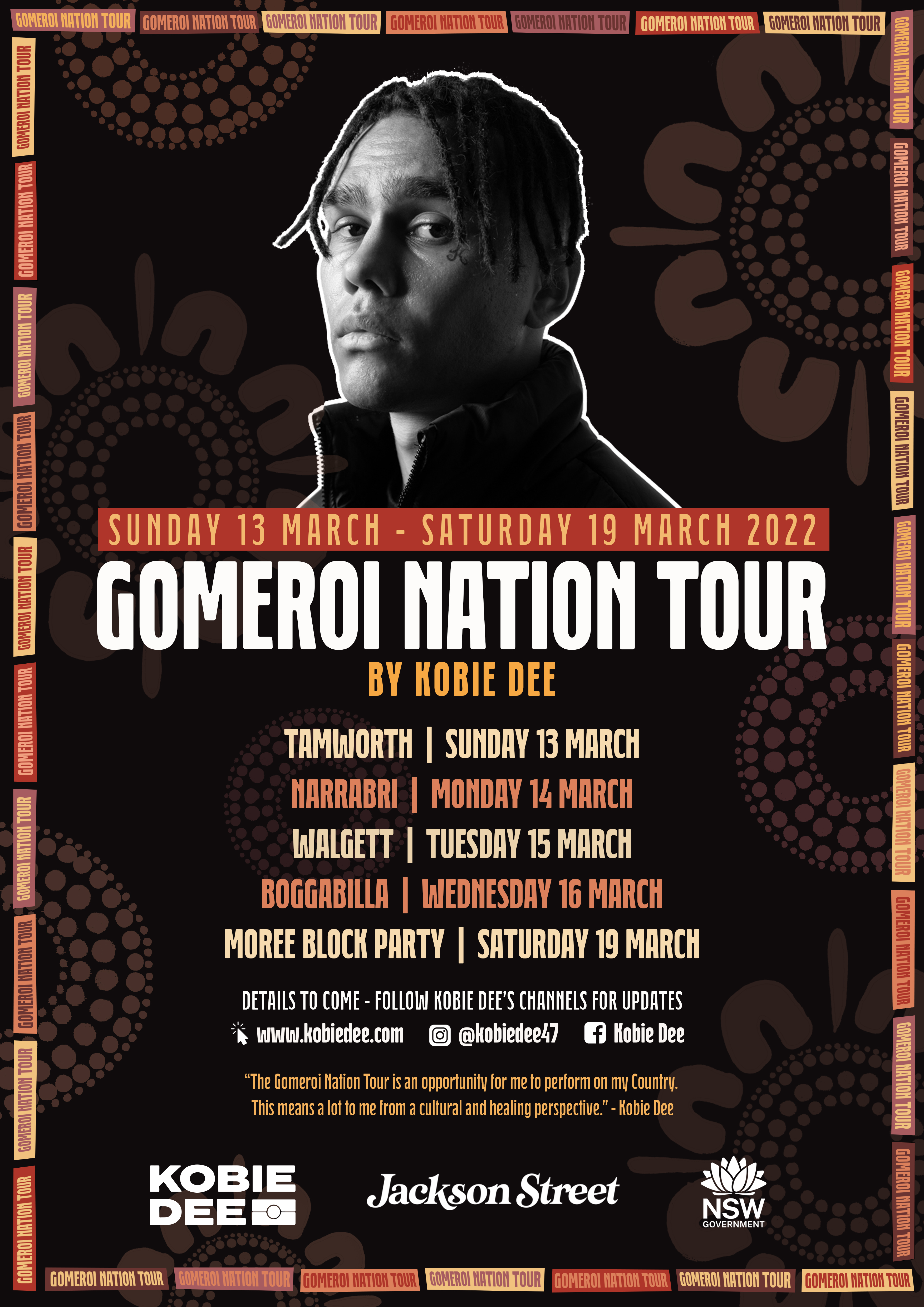 Today, Gomeroi rapper based on Bidjigal country in Maroubra, South Sydney, Kobie Dee announces his Gomeroi Nation Tour. In partnership with Jackson Street and Create NSW, the tour will visit Tamworth, Narrabri, Walgett and Boggabilla in March, before ending with the Moree Block Party starring special guests Triple One, Nter and Nooky.

The Gomeroi Nation Tour is an opportunity for Kobie to perform on his Country, the unceded land of the Gomeroi/Gamilaraay people, and tell stories through his critically acclaimed catalogue within communities who don’t generally have access to such live music events. As a persistent role model to First Nations youth with an outlook on life that’s rooted in positivity and gratitude, Kobie hopes to provide inspiration for young people living in rural locations to dream and achieve their goals.

On the Gomeroi Nation Tour, Kobie says: “The Gomeroi Nation Tour is an opportunity for me to perform on my Country. This means a lot to me from a cultural and healing perspective, performing on Country and telling my stories through music and dance, passing on knowledge, experience and wisdom like my ancestors have for thousands of years… I want to role model a way forward and show that if I can do it, they can do it too. I want to bring people and communities together in celebration and for fun, and give them an opportunity to escape their worries, trauma and hardships for one night with all expenses covered and all access granted.”

Kobie will work closely with each town’s community, to give an opportunity to local First Nations talent to support him each night. Additionally, every precaution has been taken to ensure maximum COVID-19 safety for all guests, with shows to be held in outdoor settings. Launching on Sunday, March 13, Kobie heads to Tamworth, before venturing to Narrabri the following day, Monday, March 14. On Tuesday, March 15 Kobie will visit Walgett, and then Boggabilla on Wednesday, March 16.

Finally, a very special Moree Block Party sees Kobie invite Bad Apples Music label mate Nooky, Inner West kings of rap Triple One, and solo Sydney rapper Nter to perform, as a finale and culminating celebration of culture on Saturday, March 19. The Moree Block Party is supported by Just Reinvest NSW, the Aboriginal Employment Strategy and the National Centre of Indigenous Excellence, and will be held in conjunction with the Moree Youth Forum, which Kobie is deeply involved in. It will be a chance for the young people of Moree to have a say on what they want for their community.

The Gomeroi Nation Tour ties in with Kobie Dee’s longtime dedication to community work and advocacy efforts. Last year, Kobie Dee with the help of Weave Youth & Community Services and Randwick Council, threw his debut Block Party in Maroubra’s Coral Sea Park, raising more than $40k for Youth Week 2021. Kobie is also a Youth Ambassador for Weave Youth & Community Services and Just Reinvest NSW, and on January 26 of this year, Kobie was also announced as an ambassador for Nooky’s platform We Are Warriors, dedicated to inspiring, equipping and empowering Indigenous youth to succeed by connecting them with First Nations role models.

In a massive 2021, Kobie Dee shared his debut EP Gratitude Over Pity to high acclaim from triple j, Pedestrian.TV, NME, GQ and more, plus saw the launch of his five-part podcast series, Know Role Models, featuring an inaugural episode with Australian of the Year and legendary sportsman, Adam Goodes. The series invited First Nations people to share their stories of overcoming adversity, together celebrating their unique strengths to inspire the next generation. Since 2018, Kobie Dee has found unique connections with his peers and audiences across Australia via effortless flows, laser-sharp execution, and visceral storytelling that connects deeply with all who listen. Kobie’s first official singles, “Right Now” and “This Life” captured the attention of fans and industry heavyweights alike, acclaim which was soon amplified when he debuted “Jody” for triple j’s Bars Of Steel, a single that has since clocked 1.1 million views across platforms and over 4 million Spotify streams and climbing. Transmitting his authenticity on stage, Kobie has performed across stages including Yabun Festival, Yo MTV Raps, Supported Dave at Enmore Theatre, This That Festival, Barrabuwari Festival at Sydney Opera House Forecourt, NAIDOC Week’s 2019 Block Party, Better Daze, Sydney Festival and the Sydney Opera House as part of Briggs’ Bad Apples House Party for Vivid LIVE 2019.

As a proud rapper, storyteller and advocate, Kobie Dee takes his unrivalled live show to rural locations on Gomeroi country this March, in a series of unmissable events. Stay tuned for venue and support details arriving soon.

“To be able to tour where my people have walked for thousands of years gives me a feeling that no other show has. This is for my old people, my mob, my ancestors watching over us.”