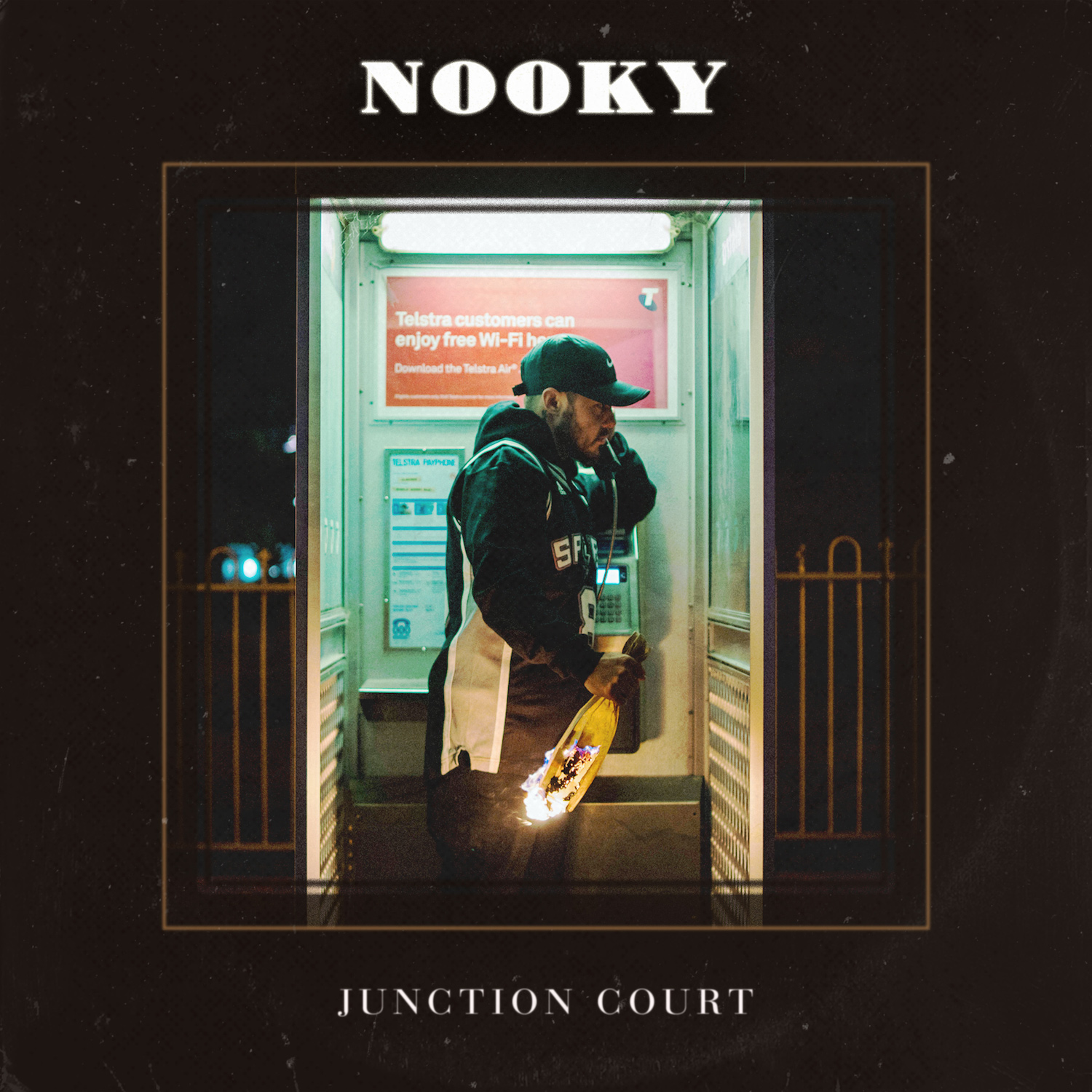 “The white cockatoo, Nyalwal flew through the fire and was badly hurt, injured & burned… but he made it out the other side. As he was flying over the river he noticed his reflection and was horrified at what he saw, but when he returned to his community, the people celebrated him. He went through the fire and experienced all that pain but he came out wiser, stronger, bigger, faster and matured. He was badly scarred, but he was a better version of himself. Junction Court is based on this story; it’s me going through the fire. It starts and ends with the same track, because I haven’t made it out yet. I’m still dealing with things.”

Today, Yuin MC and esteemed Australian rapper Nooky shares his debut EP Junction Court, out on October 11 via Bad Apples Music. The 7-track journey stems from moments of heartache and loss to the personal trials and tribulations that have followed, delivered through the lens of his political eye, complex wordplay and rich Indigenous pride.

Paying tribute to his hometown stomping ground by name, Junction Court brings to light the frustration and helplessness faced at a time of grievous loss, meanwhile drawing attention to the everyday battles experienced by fellow First Nations People. Nooky claws for survival amid all-consuming struggles from past and present, grappling with ongoing social, political and personal turmoil to deliver a snapshot of life in its rawest form through his most refined sound and honest rhymes yet. Balancing between heated energy and softer moments, the series of tracks leave no stone unturned as he delves into his own introspection while facing paradoxes between feeling incomplete and belonging to a broader community binded in heritage.

The black cockatoo creation story (mentioned above) lends lessons in hardship, lasting wounds and resilience and seep into the foundation of opening track “Nowa Nowa pt.1 Selway”. A poignant eulogy, Nooky confides in a lost mentor and loved one, with stings laid bare as his voice breaks beneath weights of hurt, while the chorus recognises strength in the fire and smoke that transformed the white cockatoo into the majestic blackness.

“Charged Up” pulls Nooky into a new legion of his own, capped with world class production matching the natural vocal ferocity he comes alive in. Fuelled in fury and vice, Nooky bares explosive emotion culminating in a fierce call out to the birthplace that has shaped him. “PS2” pokes fun with cheeky humour upfront, before unleashing a pungent metaphor for life’s games. Returning single “Numb” next steps to the plate, broadening Nooky’s unapologetic attitude while taking another step back from signature fiery lyrics to honest words, dips in trap production and a gripping insight into first-hand facets of addiction. Unpacking moments at the brink of emotion when substances are used for numbing the pains within, Nooky draws attention to the blessings of the medicine that’s turned to.

The hard-hitting beats and layered vocals of “Liberty City” pay respect to the cities he’s called home and the independence they’ve bestowed (while giving a shout out to classic Grand Theft Auto), before “CUZN” channels intricate wordplay with a profound expression, highlighting the trials and tribulations of being a young, misunderstood Indigenous Australian. Calling out issues of youth incarceration and taking swings at injustice while speaking to his own lost cousin, Nooky shines a light on the cultural bonds that stand behind the track’s title term for kinship.

Drawing to a close, “Nowa Nowa pt.2 Lucas” completes the last stanzas of his eloquent poem, signing off a tribute to another lost friend who’s bond ties back to his early days in Nowra. While seeking out the moments one gets lost on a strayed pathway, Nooky rests in his state of no resolution unsure of where to go next, while screeches of birds and haunting sirens chase his words.

Accompanying the release is a powerful extended visual for the EP’s opening and closing tracks “Nowa Nowa pt. 1 Selway” and “Nowa Nowa pt. 2 Lucas”, as well as news of upcoming EP launch shows. Nooky will first hit Melbourne’s Grace Darling on Sunday, October 20 before firing up the walls of Waywards in Sydney on Friday, October 25 and taking to his hometown for a very special performance at Shoalhaven Entertainment Centre on Saturday, November 16.

Nooky first burst onto the music scene in 2010 when he moved from coastal hometown Nowra to Sydney and quickly gained attention for his unmatched rhymes and technical rap style. After receiving international recognition following a chance meeting with Taboo from the Black Eyed Peas, he next took home the Australia Council’s Dreaming Prize for young Indigenous artists in 2016 before going on to release his debut solo single “Black Future” on Bad Apples Music in 2018. Nooky has appeared on tracks with B Wise, P Smurf, Birdz, Manu Crooks and more, plus featured his second solo track “Blackfellas” on 2019’s Deadly Hearts 2 compilation album alongside Dan Sultan, Electric Fields, Tia Gostelow and more. Also an esteemed producer, he has curated the behind the scenes on tracks from Birdz, Caiti Baker and Tasman Keith. Nooky’s initial EP singles “Numb”, premiered on triple j, and “CUZN” have been met with widespread praise from FilterZine, Acclaim, Pilerats and more, setting the scene for a compelling collection in store.

Set apart in style and raw substance, Junction Court steps into a junction of life to shine a light on the unspoken toils of the human experience. Glimpsing into a certain long-standing legacy in the making, don’t miss tuning into Junction Court today.